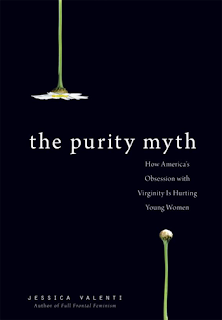 On the whole I really liked this book. It presents the idea of the purity myth in easy to understand language. Sometimes I think Valenti's books are a bit too simplistic, but I think of them as almost "primers" for people who are just getting their feet wet in the topic. I also think that this is a positive because sometimes I just don't have the attention span for some of the more academic or scholarly articles/books.

So what is the purity myth?

According to Valenti, "The Purity Myth is for women who are suffering every day because of the lie that virginity exists, and that it has some bearing on who we are and how good we are." (p 11).  The idea that whether or not a person remains a "virgin" has the biggest impact on whether this person is moral, just baffles and infuriates me. Not to mention the fact that we don't have a working definition for virginity.

Hanne Blank, author of the book Virgin: The untouched history, had a bit of a problem when she went to define "virginity". She decided that she would head to the Harvard medical school library to find a medical definition. She searched through all kinds of books, and found that there was no standard definition. She says, "Then it dawned on me - I'm in arguable one of the best medical libraries in the world, scouring their stacks, and I'm not finding anything close to a medical definition for virginity." (p. 20). Blank said she found it strange because "People have been talking authoritatively about virginity for thousands of years, yet we don't even have a working medical definition for it!"

This whole idea of an intact hymen being an indicator of virginity is crap too. Hymen's break without sexual contact and some people may have sex and still have a partially intact hymen. It's not just a piece of skin/tissue stretched across an opening... The definition that Blank came up with was "the state of having not had partnered sex" But what qualifies as sex? What about in gay couples? Valenti asked many people their opinion on what "counts" as sex. My favorite answer that she got, from a lesbian, was "It isn't sex unless you've had an orgasm". Of course that means many people may have never actually "had sex" according to this definition.

But now thanks to the Virginity Movement (or the Abstinence Movement) it seems like the focus is always on virginity. This movement tells women that in order to be "good" they must be chaste, virginal and not have sex. This tells women that in order to be "good" all they have to do is not have sex. It doesn't matter what else they do in their life, as long as they keep their legs closed they're still "good"! Not to mention the fact that you are judging women's worth purely on their "virginity". Good girls don't have sex and any woman that has had or is thinking about having sex is an inherently bad, dirty person.

This brings in abstinence only education

Abstinence only education is based on the message that teens should not have sex until marriage (of course this assumes that you are heterosexual and able to get married legally). They also love to provide false statistics and plain old lies about sex, contraception, and STI's.
A quote that Valenti includes in the beginning of chapter 2 from Darren Washington, an abstinence educator:

"Your body is a wrapped lollipop. When you have sex with a man, he unwraps your lollipop and sucks on it. It may feel great at the time, but, unfortunately, when he's done with you, all you have left for your next partner is a poorly wrapped, saliva fouled sucker."

First of all, I felt like vomiting when I read that quote. I think that this quote sums up the virginity/abstinence movement pretty well. Sex makes you dirty and useless. But only if you're a woman! I might add. Because women are keepers of their sexualities (or worse the idea that father's are the keepers of their daughter's virginity which is even more vomit inducing to me) they are the ones that  are made dirty, used, or worthless by having sex. Another great aspect of the abstinence movement (which provides sex "education" in middle schools and high schools the country over) is that it received over $178 million dollars a year in 2007. Luckily, according to SIECUS this federal funding fell to only $50 million in a year starting in 2010. But really, in my mind even one tax dollar is too many.

Time and time again, it has been proven that abstinence until marriage education doesn't work, and yet... few people seem to fight its use in our public schools.


Other topics that I found interesting in the book:
- Emergency contraception and legislation surrounding its availability.
- Legislating women, relating to abortion, birth control, miscarriages, etc.
- Purity balls
- Rape and women "deserving it"
- Women and teen girls sexuality and pleasure

All in all, I enjoyed the book. Check it out if you're looking for a fairly quick read.

Posted by michellemybelle at 4:14 PM