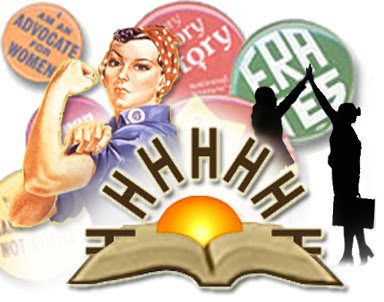 From Dictionary.com
Women's Studies: noun. A program of studies concentrating on the role of women in history, learning and culture.
From Merriam Webster
Women's Studies: the multidisciplinary study of the social status and societal contributions of women and the relationship between and gender.
First known use: 1972.
So, I majored in Women's Studies for my undergrad degree. I can't count the number of times I've told people what I majored in and was met with a blank stare or a "What is that?"
I usually reply with the fact that it was an awesome interdisciplinary degree at my school where I could take classes all across the spectrum from French to sociology to religion. But with this definition I'm leaving out the most important part of women's studies, a mention of I don't know... WOMEN!
I'm pretty sure that I do this to minimize the fact that I spent two years studying women and "women things" because I don't want to seem weird. Because, even after becoming a self proclaimed feminist, its still awkward for me to explain why I love my degree. Don't get me wrong, I'm not ashamed of anything, I just have a hard time truly explaining why I do the things I do. Especially when it comes up at the beginning of a conversation with someone I don't usually know that well.
So my goal for this year, is to come up with a better definition for women's studies. And a better reason for why I enjoyed studying it so much. Because if I can't talk about it and why I love it, then how can I expect anyone else to learn about it?
It's a work in progress. But I'll let you know how it goes.
Have you had a similar problem or situation? What about when you say something feminist and people give you strange looks?
Posted by michellemybelle at 9:02 AM