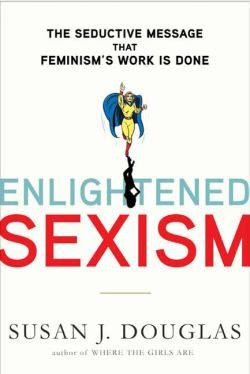 I first read Enlightened Sexism for my Voices of Oppression class last spring (as I've mentioned before). This is an easy read, although it is bit long at almost 400 pages. But Douglas' discussion of sexism and the feminist movement through the media, entertainment industry and just general everyday life makes it so interesting.
From the book, one definition of enlightened sexism,
"Enlightened sexism is feminist in its outward appearance (of course you can be or do anything you want) but sexist in its intent (hold on girls only up to a certain point, and not in any way that discomforts men or pushes feminist goals one more centimeter forward). While enlightened sexism seems to support women's equality, it is dedicated to the undoing of feminism."
In my opinion this idea seems to be at the very base of feminism, at least as I currently see it. The media and society tells girls to be sexy and alluring but then tells that they should NOT have sex until their married. Women can do what they want, become doctors, lawyers or even the president! (Well, maybe she could become the president. The jury is apparently still out on whether Americans would actually elect a female president). But don't push too far, don't try to actually pursue feminist goals while enjoying the fact that you are allowed to vote, attend universities, and actually be elected to public office.
Also, regardless of how successful women are in their career it is expected that she will not be able to continue full time in her chosen profession if she decides to also become a mother. There is no way a woman could work a 70 hour work week after she's had a child. WHO WILL STAY WITH THE CHILD?? They (usually white, male employers) cry in despair.
They hardly ever ask this question of men that are employed in the same job.
Another of the central tenets of enlightened sexism is a woman's "choice" to be sensual, a sex object.
"Because women are now "equal" and the battle is over and won, we are now free to embrace things we used to see as sexist... Now that women have the same sexual freedom as men, they actually refer to be sex objects because its liberating."
Women are just taking control of the sexuality, right? They finally have the ability to claim their right to sexuality and sexual behaviors. It's their choice!
Choice, I find, is so important in feminism. We talk about a woman's choice in regards to birth control and abortion. But in this case, how can a woman truly "choose" to become a sex object when all of the media and society is telling a girl that is how she must act. Then its not really a choice so much as an obligation if a girl/woman wants to fit into society, her school, her peer group, etc.
A pretty amazing statistic from the book,
"A 2009 poll revealed that 60 percent of men and 50 percent of women 'are convinced that here are no longer any barriers to women's advancement in the workplace."
Pretty shocking stuff, huh? What about the absolute, hard fact that women make only 77 cents to a man's dollar for the same job? Thats not a barrier??
Also very important to this idea of no barriers in the workplace lets look at the top jobs for women in 1999:
"In order, secretaries, retail and personal sales workers (including cashiers), managers and administrators, elementary school teachers and registered nurses."
Now, 8 years later the top jobs for women in 2007 were, in order:
"Secretaries, registered nurses, elementary and middle school teachers, cashiers and retail salespersons."
Wow... Look how much has changed!! Now let's examine how many women are portrayed as doctors, lawyers, CEO's and even the President of the United States on TV and in movies. Tons!
Watching TV and movies you would think, well women have definitely made it! In the book Douglas mentions the no-nonsense Dr. Bailey from Grey's Anatomy, all of the attorneys and A.D.A's on Law and Order and Dr. Cuddy (House's boss). If TV is portraying this many women in high powered jobs, surely it must be true right?!
Not so much. But it does lull the public into believing that women have indeed "made it" and are making tons of money in the top jobs around the US.
See, there's no work for feminism to do anymore! Or so they (the media, society, the government to some degree) would have you believe.
I guess my take away from this book was question everything! Pop culture, the media, TV, movies, its all great entertainment. But what are you really watching/reading? How are women portrayed? And is it an accurate portrayal? Don't be a mindless media consuming zombie. Think about what you're seeing and question it. Talk about it with others. Think for yourself!
Posted by michellemybelle at 11:06 AM